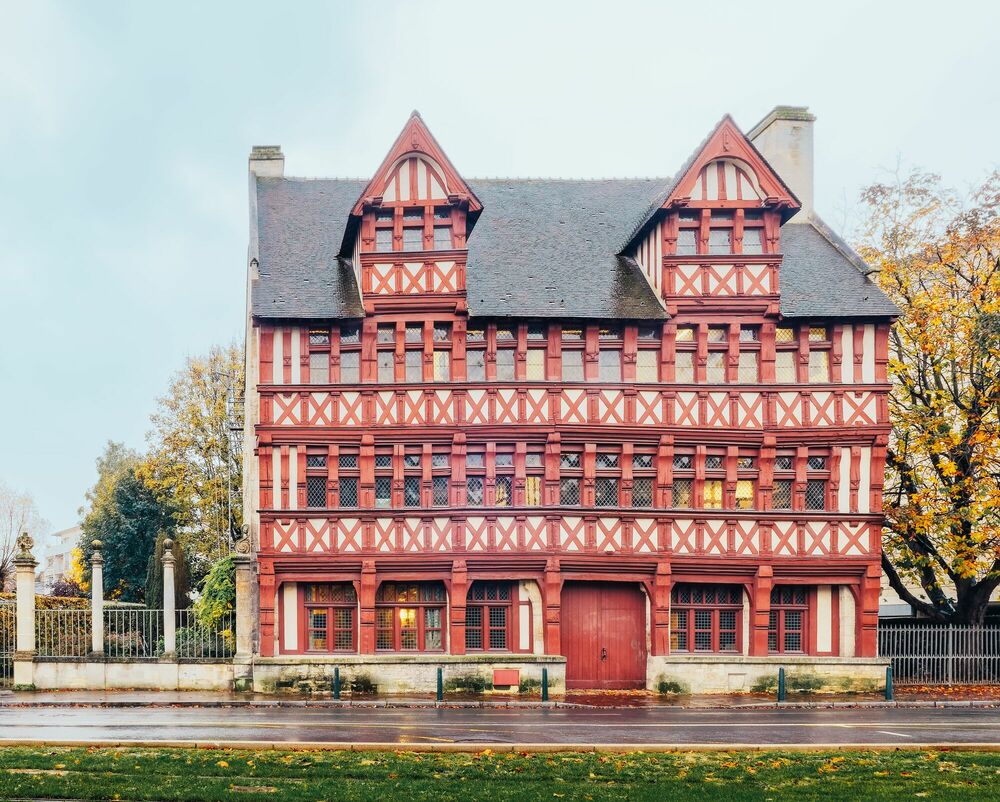 The Quatrans house is the former Hôtel des Quatrans. It is a half-timbered house built in the 1460s in the old city centre of Caen; more precisely in the rue Cattehoule (rue de Geôle), one of the most important streets in Caen. Before 1944, the Maison des Quatrans was at the heart of a dense neighbourhood and was part of a chain of mansions that lined the Rue de Geôle.

The entire building has been listed as a historic monument since 24 July 1953. The name of the house comes from a confusion with another hotel, the Manoir du Four Quatrans, which belonged to the Quatrans family, tabellions of the king in Caen, and which were located slightly further north.

From the origins to the Second World War

On 11 November 1458, Jean IV Quatrans gave Michel Le Fevre, a wealthy tanner from Caen, a piece of land which he had probably recently acquired, situated to the east of the alleyway linking the rue de Geôle to the rue des Teinturiers. On 27 December 1459, Michel Le Fevre bought the neighbouring property. On these two plots of land, he had a house built around 1460 with a long façade facing one of the main streets of the town. To the south of the courtyard, along the Petit Odon, a tannery was established. On 18 March 1519, he further extended the property southwards, beyond the Odon. Jean's son, Louis Le Fevre, made more extensive changes to the house. In 1541, the stair tower in the courtyard was rebuilt in the Renaissance style. The two dormer windows on either side of the turret were also rebuilt at this time. These two round-arched bays, framed by pilasters with a projecting entablature and a complex pediment, were similar to those of the Hôtel d'Escoville, built in the same period. He also had the property surrounded by a wall.

Around 1590, the house was sold to Jean Le Boucher, who worked as a rigger for the king at the salt storehouse in Caen. In 1610, the lots and partitions of Jean Le Boucher's estate and the 1629 plan show a game of paume. The tannery, still present in 1610, is no longer mentioned in 1657 on the death of Gabriel Le Boucher.

In 1944, during the Battle of Caen, the roofs were blown off during a bombing raid and the masonry was badly damaged. In 1945, a classification procedure was initiated for the Quatrans house; the house and the adjoining land were classified in 1953. In May 1951, the turret and the dormer windows were completely destroyed. The upper room was not rebuilt.

Until 1944, the hotel remained a residential building. In 1945, the administration of historical monuments launched a procedure to acquire the building and set up its agency there in 1953. Today, the Maison des Quatrans houses several cultural associations.

Along with nos. 52 and 54 of the rue Saint-Pierre, this house is one of the rare survivors of medieval civil architecture in Caen. As is often the case in the ducal city, only the facade facing the street is built of wood panelling for essentially aesthetic reasons. Very sober in its decoration, this façade allowed a maximum of openings on the street; the windows are enlarged at the XIXe The original bays were reconstructed during the restorations made necessary by the bombings of 1944. To understand this purely aesthetic use of wood, it is necessary to recall the importance of the extraction of Caen stone in the Middle Ages and therefore the abundance of this material which singularly limited the need to use wood in the construction itself. Many high-class houses had such facades, often with gables like nos. 52 and 54 of the rue Saint-Pierre, but the main body of the house was made of stone. At the rear, the staircase is housed in a polygonal tower surmounted by a rectangular upper chamber resting on Caenese trunks, typical of the region.

Back to news
PrevWe are talked about